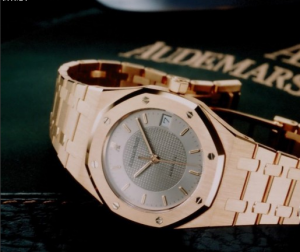 I was in 2001 around the Hong Kong watch forum magazine first saw an article on Audemars Piguet oak red gold limited edition watch article, the author is Mr. Zhong Yonglin. I remember he said this table is very “eye-catching”, display in the annual watch of the showcase, attracted a lot of fans with the fans to come to the order. I was impressed that the table back engraved with “limited” words, but did not specify the number, people have an indifferent expectations. So that consumers never know what they have this table, in this world how many brothers.

About 2002, I finally got a red oak, gray surface is very introverted, red gold color is very deep. These two colors with together, but it is reflected in a lonely taste. The central part of the square pattern of carving, quite satisfactory is my favorite. However, I have a luxury, want to figure out how many brothers in this table, in the end how many production, the phone hit Hong Kong, Taiwan and Singapore, but many friends, including a few masters of the master did not have the exact answer.

Mr. Chung’s answer seems to be the closest to the fact that he said this table due to the gift of golf equipment, so with the production of ball with the manufacturers have a joint relationship, the ball is also very expensive. So the price of the factors considered when taking the ball, it should be said that the pricing is high, and the ball with the seal of the royal oak, once printed on the AP logo, it will not be sold on other markets, so the ball manufacturers only Produced a hundred sets of clubs and backpacks. Later, due to the order of not more than 100 caused by the ball with a surplus, causing the ball with the manufacturers dissatisfied, low-cost sale of the remaining ball with. From this story, this table is more reliable within 100 messages.

Got the strap to the hands, I went to Harbin City meeting, Hao Wei Zhe and other friends when the party, Hao total of several men always staring at my oak. I understand that he wants this table, but I do not like enough, for their “dead stare” little reaction did not. The reception did not form a climax should be, if the transfer, it will climax after another.

But two months later, I did not resist the Tianjin watchmaker’s offensive. And finally in Tianjin, the Friends of the unit hard and soft folder under the attack, the transfer to the He Di. Old Hao heard the matter quite dissatisfied with me, “cheeky words, today we Qiao doctor to be a thick strategy”, the old Hao called subordinates, from my hands swept a lot of treasures.

Transfer is a moment of impulse, and soon regretted, clever is just regret, found in Japan, Yahoo, the same section of the red gold limited edition red gold section, is 10,000 yen from the price form in the Yahoo auction page. I immediately entered the Zha war, triggered a painful ten years of my “tragedy.”

After entering the bar, I found that the producers are Tokyo Tengchuan City, white to be Church, and white to be the boss of the village is my acquaintance, and then developed into a table friends. Nakamura has a Mediterranean cuisine, and I often go to join. He preferred different old engineers, I still treasure a plot of home movement 852 IWC, still in the collection box, that is derived from the village of love.

When I was in Tokyo, I went to Tokyo to call the village, and told him that I was buying him a watch. He said, “you buy it? Come directly.” I am careful, do not let friends hurt, confirmed the price, Nakamura that 900,000 yen can be.

I am hard to answer. I am ready to 1.1 million yen, did not expect so cheap, I do not know should be grateful to him, or he should thank me. At that time, 1 million yen equivalent to 68,000 yuan, and the Hong Kong market this table has been fired to 85,000, and now, the market price reached 120,000 yuan. But in the end I still said the sentence Thank you, see tomorrow, scheduled to the next day at noon in the white call to heaven.

The prelude to the tragedy comes from the toilet of the Tachikawa station. I took the central line quickly in the Tachikawa station to get out of the toilet, accidentally, coat pocket mobile phone slipped in the seat, even if my eyes quickly, the phone rescued to dry after still no signal. Scheduled to be completely disrupted, that day I have many things to do, the bridge claws Mingzi night birthday, I promised to go, which hotel has not set, no phone how can? Tachikawa North Bank has Softbank’s store, the door lined up, that days do phone seems to have any discount. I received the serial number, go to the white to see the table.

Nakamura is pleased to cancel the product from the Internet, only to bid less than 600,000, he sold me 900,000. Must save a lot of trouble, so he was smiling. I probably know that this table comes from the table fans in the hotel guests, the Japanese pawn line according to the book to the price of 25 to 30 percent of the list, 50 percent of the sale, and Nakamura flexible, If the price of 40%, customers will sell. On the customer in the village are two benefits, reducing the intermediate links.

Took the table I went to Softbank to buy a new phone, the store told me to enter the data, initialization processing, to an hour before they can take. I am very familiar with the north mouth, the South Street has not been to the street, this went into the “tragedy” trip.

I have two handbags, a portable briefcase, two handbags in a fitted oak, an IWC installed engineers, briefcase is installed umbrellas and drinks. Overall, the weight of the three bags roughly the same, I was walking around to see a variety of shops around, from the north to the south, about ten minutes away. To the south of a pharmacy to three bags from the left hand to the right hand, found the weight of some light, a closer look, carrying only two bags: a paper bag, a briefcase. I instantly pour a cold air, it is a half-time change hands off one? Carefully confirmed, found the oak did not, of course, is not even with the bag. Said it is not expensive, that a lot less, 900,000 yen, and is the table of love, I am a little panic, a little overwhelmed, sweat is also down, anyway, experienced wind and rain, lost 900,000 yen watch is the first time, calm down, decided to go back to find, from the south back to the north, the crowd such as the river crucian carp, from the Tachikawa station to all directions flow, if someone pick up must not stop, who is willing to Pick up a bag on the road when the luggage? I do not know what is inside. Then it must be out of the station or in the north and south of the line between the people will pick up this thing, looking ahead, the vast expanse of the sea, really feel lost as a stone, a trace of disappointment hit the heart.

There is no way, only to further efforts to find the police to help, went to the South police station reported that the police carefully recorded the characteristics of outsourcing, the contents of the characteristics, and then told me that he recorded here the legal effect, if the table fixed number Should be written, I immediately called to the village, just sold, there is the end of the village where the file, read the number directly, he asked me where I said at the police, he felt what, did not ask